During the 1950's, the Lutheran population in Lower Providence Township was growing rapidly; however, there was no Lutheran church in the immediate area. Individuals had to drive to Norristown, Phoenixville, and Trappe to attend a Lutheran church service. As the Audubon area continued to grow, the need for a local Lutheran church became more and more apparent. In 1959, St. Andrew's Evangelical Church was organized. The original congregation met in a rented store in the Colonial Shopping Center in Eagleville. The Rev. James Austin was called as St. Andrew's first pastor. In one year, church membership had grown so much that it was necessary to rent the adjacent store as well. The congregation continued to grow rapidly.
In 1960 the present ground was purchased. In 1962 the first sanctuary was built. The Rev. John G. Huber, Jr. accepted the call to St. Andrew's in 1965. Dramatic growth continued under his leadership. Soon additional programmatic space was needed. Fellowship Hall was added and dedicated in 1971. St. Andrew's Nursery School was established in 1972 and went on to become the pre-eminent nursery school in the area.

In 1985, the Rev. Thomas T. Kochenderfer, Jr. accepted the call to St. Andrew's. Once again, a space crunch was felt in all areas of the church life. Additional space was needed for worship, Christian Education, Social Ministry programs, as well as for the Nursery School. A Long-Range Planning Committee was formed to study the congregation's needs and to propose solutions to the space crunch problem.

In 1994, the congregation embarked on yet another building program. By December 1995, a magnificent new sanctuary and beautiful St. Andrew's Hall were built and renovations to the original sanctuary were completed. Fellowship Hall area renovations were completed by February 1996, followed by final landscaping to the church grounds during the Spring. 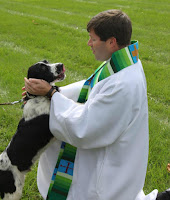 As a consequence of the new sanctuary and renovated facilities, the congregation continued to grow and soon was faced with another space crunch; not enough room for classes, meetings and storage. In May of 2006, the congregation voted to buy the adjacent property on the east side of our parking lot. During the summer, the necessary renovations were made, making space in the house useable for classes, meetings, and youth activities. This has given us breathing room for our programs and opens up other options for the future.

In 2010, the Rev. William Mueller became the fourth pastor of St. Andrew's.  Pastor Mueller's energy ad creativity is a blessing to St. Andrew's in our continued mission to
lift up Jesus to our community in worship, education and service.

The Altar Cross
The Altar Cross depicts high points from the life of the second person of the Trinity, our Lord and Savior Jesus Christ. It is the focal point of the church. Each of the five scenes illustrates one of the honorific titles Jesus bears.

The Holy Spirit
The five scenes on the cross are connected by swirling forms, the holy wind, the Holy Spirit. When the cross is illuminated with proper lighting, the shadows of two other crosses appear. The thieves crucified on either side of Jesus signify all of humanity; those who believe in and those who reject Jesus as the Son of God, the Second Person of the Trinity.

Christ the Teacher (Matthew 5:1-12)
To the left of Christ the Victor, is Christ the Teacher. The scene shows Jesus teaching the crowds in the Sermon on the Mount. Jesus taught wherever he went. Sometimes he used stories (parables), sometimes he used healings and exorcisms. But his intention was always to communicate God's will to his people. One of the most beloved parts of the Sermon on the Mount are the Beatitudes.

Christ the Judge (Apostles Creed, Second Article)
At the top of the cross, we see Christ the Judge sitting on the judgment seat with the scales of Justice at his feet. He is attended by angels heralding the resurrection to judgment. The red cloak he wears guarantees that Justice will be tempered with divine mercy.


The Creation Rose Window (Genesis 1:3)
The Creation Rose Window above the reredos depicts God's first act of creation, the creation of light. God said, "Let there be light", and there was light. The window is a kaleidoscope of form and color; a controlled explosion of form and color. It's symmetry depicts power just beginning to bring order out of chaos. Starting with hot whites in the center, the colors cool into yellows, oranges, reds, and finally purples, greens and blues. The red circle indicates the divine presence. Also visible throughout the window are hints of things that God will be creating in the future: magnetic fields, solar winds, rivers, fish, birds, flowers, depths of sky and sea. T he window in its entirety is a symbol for God the Father, Creator of everything, who, unlike his creation, is invisible.

The Pentecost Window (Acts 2:2-4)
The Pentecost Window on the east side of the church depicts the arrival of the Holy Spirit. "And suddenly from heaven there came a sound like the rush of a violent wind......Divided tongues, as of fire, appeared among them, and a tongue rested on each of them. All of them were filled with the Holy Spirit and began to speak in other languages, as the Spirit gave them ability. The holy wind, depicted by warm rose and mauve waving forms that connect the upper and lower sections of the window, has an immediate effect on the disciples shown at the bottom. The tongues of fire set them ablaze with enthusiasm for the mission; empowers them with communication and organizational skills, courage and enlightenment. The increasing presence of red in the disciples' clothing indicates their being permeated by the Spirit. Their arrangement in a half circle indicates that they are getting organized to carry out the divine will to evangelize the world.

The Ascension Window (Acts 1:8)
The Ascension Window on the west side of the church depicts Jesus returning to heaven, his work on earth completed. The disciples depicted at the bottom of the window have just heard his final words. "But you will receive power when the Holy Spirit has come upon you; and you will be my witnesses in Jerusalem, in all Judea and Samaria, and to the ends of the earth". Jesus is clothed in red, indicating the presence of divinity. Red also reminds us of his promise to send the Holy Spirit. The disciples are clothed in cool colors, and arranged haphazardly. They have not yet been organized and empowered to carry out the great challenge of witnessing to the world. But hints of that empowerment are visible. The holy wind is beginning to move. The cool waving forms in the center of the window that connect Jesus and the disciples indicate that something is going to happen. God is about to stir things up. The promised Holy Spirit is not far off and is eager to be unleashed on the world.

The Holy Spirit Rose Window (Luke 3:22a)
The Holy Spirit Rose Window above the baptistry depicts the third person of the Trinity present at Jesus’ baptism. “And the Holy Spirit descended upon him in bodily form like a dove." The dove is shown descending. The dove hovers in a protecting manner with wings outspread over all who are baptized at the font below, over the congregation, and indeed over all creation. The dove is white with accents of rose and mauve. These colors communicate purity, love and commitment. The red circle, as in the Creation Window, signifies the divine presence. The other colors and forms behind the dove show that the Holy Spirit, present at the beginning of everything, continues to permeate all of God’s rich creation as he calls, gathers, and enlightens the whole Church.

The Baptistry Panel and Doors (Matthew 3:13-17)
The sanctuary is separated from the narthex by a series of glass panels and two doors. Etched on the center panel, two doors and two side panels is the scene of the baptism of Jesus. John the Baptist is the tall figure pouring water on Jesus' head. The Holy Spirit in the form of a dove is hovering above Jesus. The curving lines encompassing the scene symbolize divine power pouring forth from the Holy Spirit. The water in which Jesus is standing is the river Jordan. It flows across the two doors onto the side panels. Whenever people pass through these doors, they symbolically walk through Jordan and Jesus' baptism to the Promised Land on the other side.

By Pastor Mueller
Dear Friends,       There are several learning opportunities coming up in week ahead that I wanted keep on your radar.   - "Aslan on the Move" :  This Sunday (downstairs in Jerusalem Room)  at 9:30 AM we gather together for a presentation / discussion based on Christian themes found in the C.S. Lewis classic, "The Lion, the Witch, and the Wardrobe."   This gathering will continue through November 24.  Anyone from high school students to senior citizens are welcome to attend.  Join us and be enriched in faith.    - "Lunch Bunch Bible Study" - We gather each Thursday at noontime in St. Andrew's Hall to look a little deeper at the assigned bible texts that will be proclaimed the upcoming Sunday.  We provide coffee and printed out texts.  You are free to bring Bibles and a bagged lunch if you wish.  People who rarely take part in Bible Study have become a part of this group and have found it very helpful in their walk of faith.
527 comments
Read more

By Pastor Mueller
Holy and Living God,   You continue to confound  our expectations and surprise us with your redeeming power in our lives.  Come among us, risen Lord.  Reveal yourself to us that we may know with confidence that nothing in all creation, not even death, can separate us from your love.  In Jesus' name.  Amen .   A word of thanks to all of you who offered your hearts and hands and voices to a deeply moving Holy Week and a joy filled celebration of the Resurrection.  It was exciting to see an increase in attendance at special services throughout Lent and Holy Week this year, especially among those who are newer to our faith community. Many hearts were touched and lives were lifted up through the celebrations of this past week. We are truly blessed. Continue to pray for those who were unable to be with us on Sunday, the sick, the struggling, the hospitalized, the homebound, and the dying.  Pray for our brothers and sisters in Christ around the world, especia
285 comments
Read more

By Pastor Mueller
Dear Friends, This Sunday in worship our Gospel lesson is Luke 11:1-13.  In my message, I will be focusing chiefly on this rather strange parable of Jesus.  However, this is also the text where on e of Jesus' disciples says, "Lord, teach us to pray" and Jesus introduces what would become known as the Lord's Prayer.  While this will not be a primary focus on Sunday, I thought I would share with you below a reflection by Christian writer Brian McClaren bringing fresh meaning to a prayer that has become so familiar that, unfortunately, it can become rote and uttered with little meaning or reflection.  I hope that you will find this helpful for your own time in prayer.  And who knows?  It may even show up sometime in a worship service. A Spoken Version of the Lord’s Prayer This rendering of the Lord’s prayer uses unfamiliar words and phrasing to help us actually hear its message rather than lapsing into an auto-pilot recitation. You can use it in public w
34 comments
Read more

Weekend Digital Worship on Facebook as well as this site